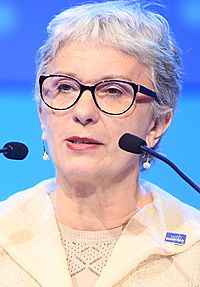 Sandra Kalniete (born 22 December 1952) is a Latvian politician, author, diplomat and independence movement leader. She was Foreign Minister of Latvia from 2002 to 2004 and as European Commissioner for Agriculture, Rural Development and Fisheries in 2004. In 2009, she became a Member of the European Parliament (MEP) for the European People's Party.

All content from Kiddle encyclopedia articles (including the article images and facts) can be freely used under Attribution-ShareAlike license, unless stated otherwise. Cite this article:
Sandra Kalniete Facts for Kids. Kiddle Encyclopedia.