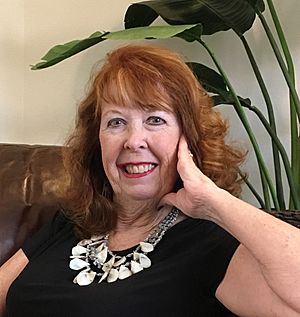 Sandra Markle is an American author of children's books. She has published more than 200 non-fiction books for children. She worked on a project for the National Science Foundation called Kit & Kaboodle which helped students to understand science better. She has won many awards for her books.

She was born on November 10, 1946 in Fostoria, Ohio, and graduated from Fostoria High School and Bowling Green State University, Bowling Green, Ohio. She worked as an elementary and middle school teacher until 1979 at which time she started being a full-time writer.

She has published more than 200 non-fiction books for children, primarily on science topics. She appeared as Ms. Whiz on local television in Asheville, North Carolina and Atlanta, Georgia. She wrote and helped developed science specials for CNN and PBS. She also produced the first on-line interactive program from Antarctica in 1996: On-line Expedition Antarctica. She has also written fiction, creating the young adult novel, The Fledglings (now available as an e-book "Soaring Like Eagles"), and a series of poetic prose natural history stories, including The Long, Long Journey, and Waiting For Ice. Sandra Markle is particularly noted for her work in sharing scientists as detectives solving real-life mysteries, including "The Case of the Vanishing Golden Frogs", "The Case of the Vanishing Honeybees", and "The Case of the Vanishing Little Brown Bats".

Markle was chosen to journey to Antarctica in 1996 and 1998 as part of the National Science Foundation's Artists and Writers Program. A number of books came out of her experiences in Antarctica, including A Mother's Journey (Charlesbridge, 2005).

Markle also worked on a project for the National Science Foundation called Kit & Kaboodle. Its goal was to make science more interactive in order to improve student understanding of basic curriculum concepts. The results of independent testing conducted by Georgia State University revealed that students participating in Kit & Kaboodle scored significantly higher on related skills tests than those that did not. Kit & Kaboodle has been used by thousands of schools in all fifty states plus eleven countries.

All content from Kiddle encyclopedia articles (including the article images and facts) can be freely used under Attribution-ShareAlike license, unless stated otherwise. Cite this article:
Sandra Markle Facts for Kids. Kiddle Encyclopedia.