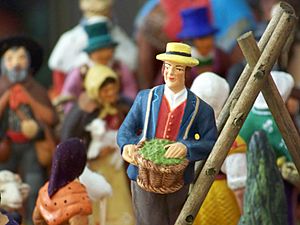 A santon depicting a produce seller

A santon ("little saint") is small, hand painted, terra cotta figurine manufactured in Provençal. These figurines represent characters in the "nativity scene" such as the Holy Family and the Magi. Also represented are traditional characters from 19th century French village life such as the scissors sharpener, the fishwife, the chestnut seller, and the miller. Santons had their origin in the days of the French Revolution when revolutionists forbade large nativity scenes. The production of santons today is a family affair with parents teaching the craft to their children. Santon makers gather in Marseille and other places during the Christmas season to display and sell their products.

All content from Kiddle encyclopedia articles (including the article images and facts) can be freely used under Attribution-ShareAlike license, unless stated otherwise. Cite this article:
Santon Facts for Kids. Kiddle Encyclopedia.