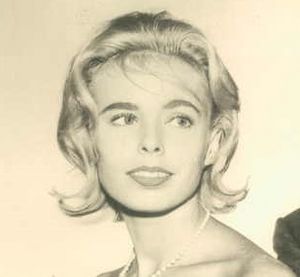 Sarah Lynne Marshall (25 May 1933 – 18 January 2014) was an English actress. Her television credits include: The Twilight Zone, F Troop, Get Smart, and Star Trek and Daniel Boone. She was born in London, the daughter of actors Herbert Marshall and Edna Best.

Marshall died from cancer of unknown primary origin on 18 January 2014 in Los Angeles, California in the United States. She was 80 years old. She was outlived by her husband and son.

All content from Kiddle encyclopedia articles (including the article images and facts) can be freely used under Attribution-ShareAlike license, unless stated otherwise. Cite this article:
Sarah Marshall (actress) Facts for Kids. Kiddle Encyclopedia.