Saunders Island is a crescent-shaped island 8.8 km (5.5 mi) long, lying between Candlemas Island and Montagu Island in the South Sandwich Islands, a British Overseas Territory in the southern Atlantic Ocean. It is a volcanic island composed of an active stratovolcano, 990-metre (3,248 ft) Mount Michael.

Saunders Island was discovered in 1775 by Captain James Cook, who named it for Sir Charles Saunders, First Lord of the Admiralty. It was charted in greater detail by Bellingshausen in 1819, and in 1930 by DI personnel aboard Discovery II. The island was surveyed in 1964 by HMS Protector after whose captain, Captain Martin S. Ollivant, the westernmost point, Ollivant Point, is named. Carey Point also marks the western extremity of the island. Shackleton sometimes misspells the island's name as "Sanders Island" in his book South. 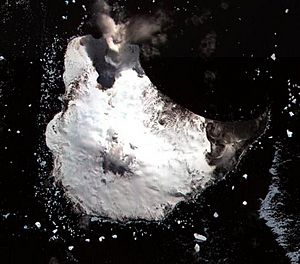 All content from Kiddle encyclopedia articles (including the article images and facts) can be freely used under Attribution-ShareAlike license, unless stated otherwise. Cite this article:
Saunders Island, South Sandwich Islands Facts for Kids. Kiddle Encyclopedia.