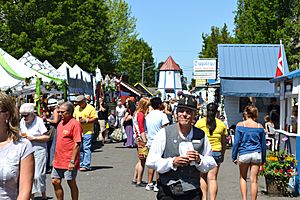 Finnish Day at the Scandinavian Festival

The festival was started in 1961 by Dr. Gale Fletchall as a way to save a dying town. Downtown businesses were closing up, as the new Interstate 5 bypassed Junction City, diverting most of the traffic going through town on Oregon Route 99. It was then that Fletchall began searching for a rallying point for community spirit. He thought a citywide celebration would be ideal, but he was stumped for a theme. He considered and discarded several possibilities before settling on the most obvious, a celebration of the city’s very real but very dormant Scandinavian heritage. He talked the idea over with older Danish-American residents, and then secured financial backing from the chamber of commerce in May 1961. The first community classes in Scandinavian dancing and singing were organized a few weeks later, and church and civic organizations were persuaded to operate food and craft booths. In August 1961 the first annual Scandinavian Festival opened in temporary booths in downtown Junction City. Fletchall expected perhaps 2,000 visitors; he got 25,000. Today it is one of Oregon's most popular events.

No live festival was held in 2020, although most went virtual.

Since 1961, the city has attracted visitors nationally to the downtown area, which is transformed into an old world town for the occasion. Each day of the festival highlights a particular Scandinavian country—Denmark, Sweden, Finland, and Norway.

The festival hosts myriad different stalls, taking up the bulk of the festival space. Most are lined along either side of the street, but some are set up indoors to offer shelter to escape either the sun or rain. Food stalls are the most popular attraction to the festival. The Æbleskiver booth and the meat pie booth are particularly well-known, and are seldom seen without a large crowd. Other booths include handcrafts such as Hardanger embroidery, bobbin lace, tatted lace, and Rosemaling are displayed and sold among paintings, needlework, and ceramics. Many handmade toys are displayed as well—puppets on strings, wooden swords, dolls, and others showcase toys from a bygone era that can still be enjoyed today.

The featured stalls are expected to match the authentic Scandinavian theme of the festival. There have been incidences in which owners of certain stalls have gotten in trouble for not maintaining this theme. One year, a lemonade stand designed their booth to look like a large lemon. As soon as the festival committee discovered this, they were asked to change the booth to match the theme, leading to an awkward—and unsuccessful—attempt to camouflage the giant lemon behind traditional Scandinavian decorations.

All content from Kiddle encyclopedia articles (including the article images and facts) can be freely used under Attribution-ShareAlike license, unless stated otherwise. Cite this article:
Scandinavian Festival Facts for Kids. Kiddle Encyclopedia.