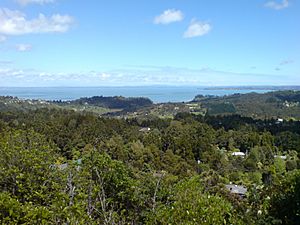 A view over the Manukau Harbour from Scenic Drive.

Scenic Drive is a road that runs through the bush-clad Waitākere Ranges from Titirangi to Swanson on the western outskirts of Auckland, New Zealand. It is part of Auckland urban route 24. As the name indicates, it is famous for the sweeping views over the western parts of the Auckland Region.

The road passes through the village of Waiatarua, but most of it is through native bush (forest), in Centennial Memorial Park or the neighbouring water catchment area. It connects with West Coast Road, Shaw Road, Konini Road and Piha Road to the surf beaches at Karekare and Piha. It is paralleled by the disused Exhibition Drive, now used by mountain bikers.

The Arataki Visitor Centre provides displays of the local flora, fauna and geology and well-maintained walking tracks. Along the parts of the road that pass through private land are a native-plant seller, several potters and a disused winery.

Large parts of the Waitākere Ranges are now closed to the public for hiking and walking to help stop the spread of the incurable Kauri dieback disease.

Scenic Drive was built during the 1930s depression as a Schedule 5 project to provide work for the unemployed. It was intended to be a tourist route and assist with maintenance of the dams in the water catchment area. Subsequent urban sprawl has meant those small parts of the route not protected as reserve or for water catchment have prestige housing at the southern end, and life style blocks at the north. During construction of the south-east portion of the Scenic Drive in the early 1930s, several quarries were opened up to supply coarse fill material. Two of these quarries were in Shaw Road and Carter Road, on either side of a narrow ridge that runs north from the Scenic Drive. During blasting operations, fossils were discovered in the Shaw Road quarry.

All content from Kiddle encyclopedia articles (including the article images and facts) can be freely used under Attribution-ShareAlike license, unless stated otherwise. Cite this article:
Scenic Drive, Auckland Facts for Kids. Kiddle Encyclopedia.