The Seaview Asylum (also known as Seaview Hospital) was a psychiatric hospital located to the north of Hokitika, in the West Coast Region of New Zealand's South Island, adjacent to the former Westland Hospital. It was open from 1872 to 2009, was once the town's biggest employer and trained psychiatric nurses.

In the 1860s lunatics in the rapidly growing town of Hokitika were taken to the gaol which quickly outgrew its buildings; a new gaol was built north of the town at Seaview Terrace. The first hospital in Hokitika (which later became Westland Hospital) was built to the south of the town in 1865 and was able to accommodate a few psychiatric patients but after 1867 the majority of them were sent to Sunnyside Hospital in Christchurch. In 1869 when the option to send patients to Sunnyside was no longer available patients were again kept in the gaol until the Seaview Asylum was opened in 1872. The hospital was built by the provincial government.

Hugh and Winifred Gribben were the superintendent and matron of Seaview from 1872 to 1904. In the early years patients undertook domestic and outdoor work including trades. John Downey was promoted to Superintendent in 1904, and his wife served as matron. In 1905 the hospital was staffed by the superintendent, matron, male and female attendants, and a labourer. In 1904 Dr Duncan MacGregor, Inspector-General of Hospitals and Asylums, authorised the villa hospital pattern of development at Seaview Hospital.

Nursing training began at Seaview in the 1930s. It was estimated that about 500 nurses had graduated from the Seaview School of Psychiatric Nursing when it closed in 1992.

Three units were closed in the 1990s; by 2002, the hospital board sold the asylum to a property developer.

Since the facility has been closed it has been used on numerous occasions by the New Zealand Defence Force to stage urban warfare, search and rescue and public disorder exercises.

The hospital cared for patients with intellectual disabilities, psychiatric and psychogeriatric conditions and the frail elderly. In keeping with other asylums across the country, such as Seacliff, Sunnyside, Cherry Farm and Avondale, names in the past suggested a rural setting or holiday resort, and served to mask the nature of some patient’s experience. 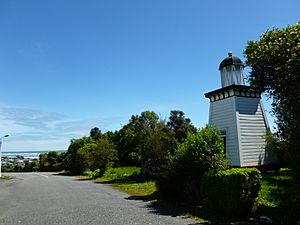 The lighthouse and view of Hokitika township from Seaview Hill

Located on a government reserve, the land was terraced and consisted of approximately 150 acres (61 ha). The major buildings included dormitories, single rooms, dining rooms, and a padded cell. The Seaview Lighthouse, a Category II registered Historic Place erected in 1879, was once scheduled for demolition, but it found new leases of life as an observation tower for hospital and as a coast watch station during World War Il. The lighthouse is also known as the Hokitika Lighthouse was restored in 2002 by Heritage Hokitika. 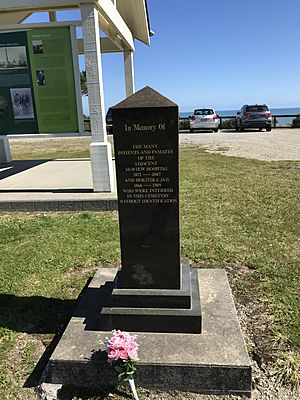 Hokitika Cemetery memorial for patients of Seaview Asylum and inmates of Hokitika Gaol who are buried in this cemetery without identification. Transcription: "In Memory of / the many / patients and inmates / of the / adjacent / Seaview Hospital / 1872–2007 / and Hokitika Jail / 1866–1909 / who were interred / in this cemetery / without identification"

In 2017 a suspicious fire damaged some of the remaining buildings. The land is now sparsely populated and many of the buildings are falling into disrepair, the swimming pool and tennis courts are abandoned but still retain key features such as the nets and diving boards. The through road, although unmaintained, is still passable from one end. The other end has been shut off as some of the land is being cleared.

All content from Kiddle encyclopedia articles (including the article images and facts) can be freely used under Attribution-ShareAlike license, unless stated otherwise. Cite this article:
Seaview Asylum Facts for Kids. Kiddle Encyclopedia.