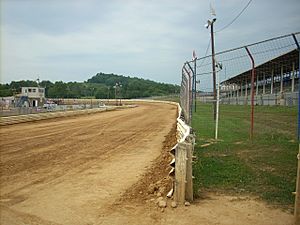 Selinsgrove Speedway was built in 1945 under the supervision of Joie Chitwood, a Hollywood stunt man and race car driver from Denison, Texas. The land had previously been a family farm owned by the Allison and Davis families of Snyder County. They sold it to the Dauntless Hook and Ladder Volunteer Fire Department of Selinsgrove in 1941 as a permanent home for the fire company's annual carnival. The first race was held on July 20, 1946 as an American Automobile Association-sanctioned event promoted by Sam Nunis. The winner was Bill Holland, who would go on to win the Indianapolis 500 in 1949. Placing second was Red Byron, who won the first NASCAR-sanctioned race ever, held on February 15, 1948 at the Daytona Beach Road Course and would go on to become the first champion of the NASCAR's Strictly Stock division, now known as the Monster Energy NASCAR Cup Series. 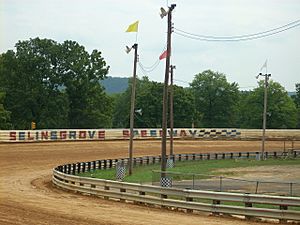 Another view of Selinsgrove Speedway

Selinsgrove Speedway began hosting weekly events in 1950, under the promotion of George "Buster" Keller. Weekly racing continued until 1959, when the action at the track slowed to occasional races. In 1963, weekly racing resumed once again. Chris Economaki, a pioneer of motorsports writing, served as the track announcer during the early 1950s. The track continued to expand its operation over the years and was managed by several promoters including Hall of Fame promoter Jack Gunn(ne John Gunnels), and from 2001 thru 2015 Charlie Paige who directed vast improvements and expansion at Selinsgrove Speedway. New concession stands were built along with new restrooms and V.I.P. facilities. The smaller Selinsgrove Raceway Park was built in the infield in 2001 and the backstretch and turns 1 and 3 were widened in 2006.

As of 2020 the property is still owned by the Selinsgrove Fair Association with racing conducted under the Speedway Management Group banner. Businessman and sprint car owner Michael Heffner and Alan Kreitzer, a long time promoter at Silver Springs Speedway, Lincoln Speedway and Williamsgrove Speedway, head SMG with Steve Inch serving as General Manager

With the advent of larger race car haulers, the pit area, formerly located in the infield, was moved to the outside of turn 4 for the 2018 season, improving the view of the track for spectators. In 2020, the United States Auto Club held its first Silvercrown race at the track. It was named the Bill Holland Classic after the track's first winner and it was 74 laps in length as it was the 74th anniversary since his win.

The following racing series have run events at Selinsgrove Speedway since 1946.

All content from Kiddle encyclopedia articles (including the article images and facts) can be freely used under Attribution-ShareAlike license, unless stated otherwise. Cite this article:
Selinsgrove Speedway Facts for Kids. Kiddle Encyclopedia.