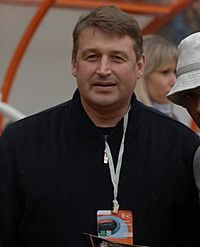 Serhiy Atelkin (Ukrainian: Сергій Ателькін, January 8, 1972 – October 1, 2020) was a Ukrainian footballer. Atelkin became the first player from the independent Ukraine who played in the Italian Seria A. He was born in Khrestivka, Ukraine. He made two caps for the national team in 1997. From 1990 to 1997, he played for FC Shakhtar Donetsk.

All content from Kiddle encyclopedia articles (including the article images and facts) can be freely used under Attribution-ShareAlike license, unless stated otherwise. Cite this article:
Serhiy Atelkin Facts for Kids. Kiddle Encyclopedia.