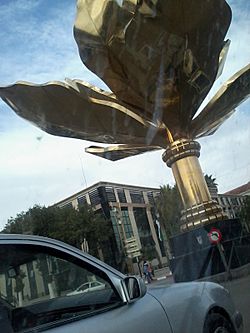 A palm made of bronze in the middle of Sétif

Setif (Arabic: سطيف) is a town in northeastern Algeria. It is the capital of Sétif Province and it has a population of 288,461 people as of the 2008 census. Setif is east of Algiers. It is the second most important Wilaya after the country's capital. The streets are lined with trees with a fountain and theater, giving the town a French feel.

Setifis (or Sitifis) was founded by the Romans, during the reign of Nerva, as a colony for veterans. Although no buildings of this period are known, a cemetery found in the 1960s seems to have contained tombs from the early colony.

The population is Chaoui, Kabyle and Arab in origin.

All content from Kiddle encyclopedia articles (including the article images and facts) can be freely used under Attribution-ShareAlike license, unless stated otherwise. Cite this article:
Setif, Algeria Facts for Kids. Kiddle Encyclopedia.