The Mall at Shelter Cove 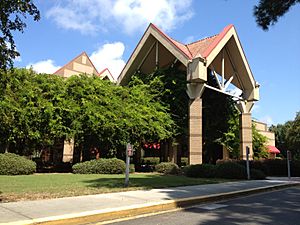 The Mall at Shelter Cove, September 2012

The original mall opened in April 1988 under the development of Jim Wilson & Associates, with Jordan Marsh and Belk as anchor stores. At the time, it included more than 60 inline tenants, such as Banana Republic, Victoria's Secret, Express, The Limited and four restaurants, which included Patti Arbuckle's, a favorite of both tourists and locals, that featured live entertainment on its patio.

In 1991, Jordan Marsh closed and JCPenney replaced it. JCPenney closed in 1996, becoming a Saks Fifth Avenue in 1997. Saks downgraded the store to an Off Fifth outlet store in 2004.

Although Belk expanded its store in 2007, Mall at Shelter Cove lost many major tenants throughout the 2000s. Stores like Crabtree & Evelyn, Brooks Brothers, PacSun, Waldenbooks, Ann Taylor, and Williams Sonoma were all lost by the end of the decade. In 2008, representatives of then-owner Petrie Ross announced plans to add a movie theater, but this was canceled because the company could not secure money to build one.

Off Fifth relocated to the Tanger Factory Outlet Centers in nearby Bluffton in February 2011. Shortly afterward, supermarket chain Kroger bought the mall. In early 2012 it was reported that the mall would be demolished (excluding the Belk stores) and turned into a community park development with a Kroger grocery store.

The Mall at Shelter Cove closed January 2013, with demolition beginning on the 13th. Construction began soon afterward, redeveloping the mall into an outdoor lifestyle center. The new center features 290,000 square feet (27,000 m2) of retail space along with a five-acre park.

In December 2013, Kroger opened their location in the center, adding the second anchor store. Soon after, additional tenants such as JoS. A. Bank, Orange Leaf, and AT&T added locations in the center.

In February 2017, it was announced that site work for the first of two luxury apartment buildings was nearing completion. The first houses 136 apartments and the second holds 104 units. In May 2017, the first of the two buildings opened. The second is scheduled to open by the end of 2018 into early 2019 as construction nears completion.

All content from Kiddle encyclopedia articles (including the article images and facts) can be freely used under Attribution-ShareAlike license, unless stated otherwise. Cite this article:
Shelter Cove Towne Centre Facts for Kids. Kiddle Encyclopedia.