Comparing the 2005 image at right to the one below taken in 1913, it is apparent that Shepard glacier has retreated significantly between these dates. 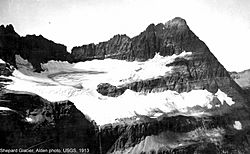 Shepard Glacier as photographed in 1913

All content from Kiddle encyclopedia articles (including the article images and facts) can be freely used under Attribution-ShareAlike license, unless stated otherwise. Cite this article:
Shepard Glacier Facts for Kids. Kiddle Encyclopedia.