Glacier County is located in the U.S. state of Montana. As of the 2010 census, the population was 13,399. The county is located in northwestern Montana between the Great Plains and the Rocky Mountains, known to the Blackfeet as the "Backbone of the World". The county is geographically and culturally diverse and includes the Blackfeet Native American Reservation, Glacier National Park, and Lewis and Clark National Forest. The county is bordered by 75 miles of international boundary with two ports of entry (Piegan and Del Bonita) open year-round and one seasonal (Chief Mountain) international border crossing into Alberta, Canada.

Five small communities and two incorporated towns are located within the county.

Cut Bank is the county seat with a population of approximately 3,500 residents. It is located at the east end of the county at the start of the Great Plains. Cut Bank sprang up around the railroad and agriculture needs of the surrounding area and also reflects part of a large oil boom in the early part of the century. The diverse population is the result of this settlement. Town resources include a hospital and clinic, a historic airport with regional and international connections, a nine-hole golf course, and a swimming pool. Nearby sites of the Louis and Clark expedition and other historic and prehistoric sites can be visited. The Glacier County Museum has a collection of area artifacts, historic buildings, community memorabilia, and a comprehensive archive of early area history and individuals, including a large collection of data on Blackfeet history.

Browning is the home and government seat of the Blackfeet Tribe. The incorporated portion of Browning, at 1,400, does not reflect the population of 7,000 in the community that is largely representative of the Blackfeet Tribe on a part of their ancestral homeland dating back over 5,000 years. Town resources include a federal building, community college, Native American Museum and Heritage Center, casino, fairgrounds, race track, and Native American camp area that hosts an annual Native American celebration and pow-wow. Many events center on this area during the summer months. Blackfeet tribal fishing and recreational permits, along with guide and tour services to blue ribbon trout fishing and other recreational opportunities, can be found there.

Babb is a small unincorporated farming and ranching community on the Blackfeet Indian Reservation. The community experiences a large influx of tourists in the summer months as it is the gateway to the Many Glacier area of Glacier National Park. Community infrastructure includes one school (Babb Elementary [1] School), a U.S. post office [2], a fire station that houses the Babb/St. Mary Volunteer Fire Department [3], Thronson's General Store and Motel [4], several restaurants, two churches, and a gas station. Nearby attractions include Glacier National Park [5], the Many Glacier Hotel, the St. Mary River, the St. Mary Irrigation Canal, Chief Mountain, and the U.S. ports of entry of Piegan and Chief Mountain.

East Glacier Park Village, a small winter community, grows in the summer with many visitors and the summer help from all parts of the globe that meet the needs of the larger population. It is the site of the largest of Glacier Park’s historic hotels and fleet of “red buses”. There is a nine-hole golf course, campgrounds, trail rides, boat rides, native interpretive tours and other recreational activities located at this stop on the railroad.

St. Mary is an unincorporated community on the western border of the Blackfeet Native American Reservation adjacent to Glacier National Park. The village is the eastern terminus of the Going-to-the-Sun Road which bisects the park east to west, a distance of 53 miles (85 km). Fewer than 50 people reside in the village year-round; however, the population increases tenfold on a busy summer evening. Several lodges, restaurants and cafés, a small grocery store, two gas stations and campgrounds are located in the village. A large housing area for National Park Service personnel is located adjacent to the village, but within the park. U.S. Route 89 passes through the village, which lies between Saint Mary Lake in Glacier National Park and Lower St. Mary Lake on the Blackfeet Native American Reservation.

Starr School is a census-designated place (CDP) in Glacier County, Montana, United States. The population was 248 at the 2000 census.

There were 4,304 households of which 42.90% had children under the age of 18 living with them, 53.3% were married couples living together, 16.2% had a female householder with no husband present, and 24.6% were non-families. 21.6% of all households were made up of individuals and 7.7% had someone living alone who was 65 years of age or older. The average household size was 3.03 and the average family size was 3.56. 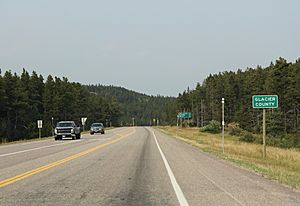 All content from Kiddle encyclopedia articles (including the article images and facts) can be freely used under Attribution-ShareAlike license, unless stated otherwise. Cite this article:
Glacier County, Montana Facts for Kids. Kiddle Encyclopedia.