The Great Northern Railway platted the community of Midvale in the 1890s. The town name was eventually changed to Glacier Park and officially became East Glacier Park in 1949. 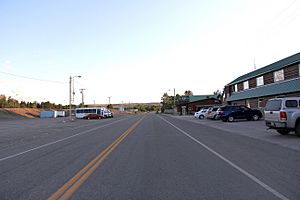 According to the United States Census Bureau, the CDP has a total area of 4.4 square miles (11 km2), all of it land.

There were 148 households, out of which 35.1% had children under the age of 18 living with them, 50.7% were married couples living together, 14.2% had a female householder with no husband present, and 31.1% were non-families. 23.0% of all households were made up of individuals, and 4.1% had someone living alone who was 65 years of age or older. The average household size was 2.68 and the average family size was 3.27. 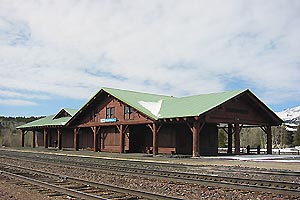 The East Glacier Park Amtrak Station is open seasonally during the spring, summer and fall, served by the Empire Builder between Chicago and Seattle/Portland. During the winter the stop is at Browning, Montana, just east of East Glacier Village. Glacier Park International Airport at Kalispell is the closest airport.

All content from Kiddle encyclopedia articles (including the article images and facts) can be freely used under Attribution-ShareAlike license, unless stated otherwise. Cite this article:
East Glacier Park Village, Montana Facts for Kids. Kiddle Encyclopedia.