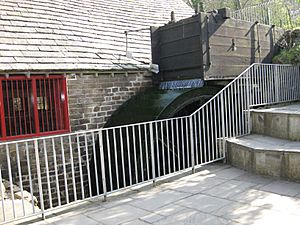 Shepherd Wheel is a working museum in a former water-powered grinding workshop situated on the Porter Brook in the south-west of the City of Sheffield, England. One of the earliest wheels on the River Porter, it is one of the few remaining—and effectively complete—examples of this kind of enterprise, one that used to be commonplace in the Sheffield area. Its 5.5 m (18 ft) diameter overshot water wheel is powered from a large dam stocked with water diverted from the Porter Brook. The workshops, dam, goit and weir are Grade II listed, and the site is a Scheduled Ancient Monument.

In 1584, William Beighton, a cutler of Stumperlowe left to his sons in his will

"all my interest terms titles and possession which I have in and upon one watter whele called Potar Whele which I have of the grant of the said Lord".

This is the earliest reference to a wheel on the site. The description of this wheel matches one that a Mr Shepherd held the tenancy of in 1794. There were no similar wheels in the area, which leads us to the conclusion that the references are to the same wheel. From the 1820s, the wheel was occupied by a family called Hinde. They worked there for over a hundred years until the end of Shepherd Wheel's working life in about 1930.

In William Beighton's time, the land was originally owned by Gilbert Talbot, 7th Earl of Shrewsbury, who was Lord of the Manor of Sheffield. When he died, his estates passed to Thomas Howard, who became Duke of Norfolk. The land remained with the Dukes of Norfolk until 1900, when Sheffield City Council bought Whiteley Woods to make a public park.

Shepherd Wheel was included in this public park. Over many years, local historical societies campaigned for its restoration and the site was opened as a museum in 1962. After closure in 1997 the site was placed under the management of Sheffield Industrial Museums Trust in 1998.

The present buildings date from c1780, during the time that Edward Shepherd—after whom the site is now named—was the tenant of the wheel (1749–1794). Throughout the 19th century the wheel was held by the Hinde family, who operated it until its closure in 1930.

In 1900, Sheffield City Council bought the land surrounding the wheel from the Duke of Norfolk to make a public park. After a campaign by local history societies, the wheel was restored and opened as a museum in 1962. The museum was closed in 1997 and passed to the management of the Sheffield Industrial Museums Trust in 1998.

The Shepherd Wheel reopened (after a restoration project partly funded by a £500,000 Heritage Lottery grant) on 31 March 2012.

All content from Kiddle encyclopedia articles (including the article images and facts) can be freely used under Attribution-ShareAlike license, unless stated otherwise. Cite this article:
Shepherd Wheel Facts for Kids. Kiddle Encyclopedia.