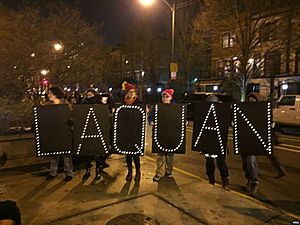 A memorial from protesters shortly after the video's release, November 24, 2015

As a result, mayor Rahm Emanuel fired Chicago police superintendent Garry McCarthy on December 1, 2015. Few days later, Emanuel apologized for the shooting, but since then, Emanuel has received criticisms and negative comments towards him and his administration.

Video of the shooting, captured on one police cruiser's dashboard camera, was released to the public on November 24, 2015, over 13 months after the shooting. Van Dyke was charged with first-degree murder within hours after the video's release. After turning himself in to authorities, he was initially ordered held without bail at Cook County Jail, but released on November 30 after posting bail.

On November 25, Senator and presidential candidate Bernie Sanders released a statement sending condolences to McDonald's family and criticizing the Emanuel administration and the Chicago's police force.

There have been numerous protests denouncing Laquan McDonald's death. In November 27, a major day for shopping in the U.S., a group of protesters chanted "sixteen shots" and other slogans while marching on Michigan Avenue, the city's central shopping district. This caused some businesses to shut their doors and the police closed Michigan Avenue, a six-lane street.

The FBI opened an investigation into McDonald's death, and the city of Chicago approved a five-million dollar settlement in April 2015, although no lawsuit was filed. The police had originally claimed that McDonald had lunged at an officer. However, video footage contradicts that claim; McDonald made no lunges.

All content from Kiddle encyclopedia articles (including the article images and facts) can be freely used under Attribution-ShareAlike license, unless stated otherwise. Cite this article:
Shooting of Laquan McDonald Facts for Kids. Kiddle Encyclopedia.