Shrimp on the barbie facts for kids

Kids Encyclopedia Facts
For the 1990 film, see The Shrimp on the Barbie. 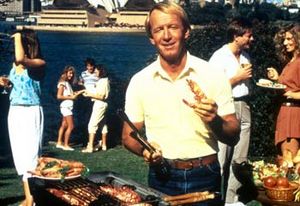 Screenshot from the advertisement

"Shrimp on the barbie" is a phrase that originated in a series of television advertisements by the Australian Tourism Commission starring Paul Hogan from 1984 through to 1990. The full quote spoken by Hogan is "I'll slip an extra shrimp on the barbie for you", and the actual slogan of the ad was "Come and say G'day". It has since been used, along with some variations, to make reference to Australia in popular culture.

The advertisement pre-dated Hogan's popularity in the 1986 film Crocodile Dundee. Thus they were not initially seen as celebrity advertisements in the US, as he was relatively unknown in the United States (though well known in the UK through his long-running television comedy show), although the film somewhat increased the commercial's popularity.

The advertisements were developed by the Australian agency Mojo in conjunction with American agency N.W. Ayer. The campaign was launched during the National Football Conference Championship Game on 8 January 1984. Before the campaign, Australia was approximately number 78 on the "most desired" vacation destination list for Americans, but became number 7 three months after the launch, and soon became number 1 or 2 on Americans' "dream vacation" list, remaining in that position for most of the next two decades.

"Barbie" is Australian slang for barbecue and the phrase "slip a shrimp on the barbie" often evokes images of a fun social gathering under the sun. Australians, however, invariably use the word prawn rather than shrimp. Because the commercial was commissioned for broadcast in the United States, the change was made to limit audience confusion. The commercial was so influential that three decades later, USC Trojans football player Chris Tilbey, an Australian, reported that he was quoted the "shrimp on the barbie" line "Every day. Every day".

The term was used in the opening sequence of the 1994 cult comedy Dumb and Dumber, when protagonist Lloyd Christmas (portrayed by Jim Carrey) tries to hit on an Austrian woman, mistaking her for an Australian: "Let's put another shrimp on the barbie". She then turns him down, saying "Let's not". In Mortal Kombat 11 videogame, the phrase is used by Cassie Cage to mock Kano (an Australian weapon dealer).

Prawns are a popular traditional Christmas seafood in Australia. However, crustaceans such as shrimp and prawns are less common, on average, in the Australian cuisine than in the United States. In the late 1980s, annual per capita consumption of shrimp stood at 1.3 kg in the United States, second only to Japan.

All content from Kiddle encyclopedia articles (including the article images and facts) can be freely used under Attribution-ShareAlike license, unless stated otherwise. Cite this article:
Shrimp on the barbie Facts for Kids. Kiddle Encyclopedia.