Sigmund Werner Paul Jähn (13 February 1937 – 21 September 2019) was a German cosmonaut and pilot. In 1978, he became the first German to fly in space as part of the Soviet Union's Interkosmos programme. He was born in Morgenröthe-Rautenkranz, Saxony, Germany.

Jähn was married and had two children. He lived in Strausberg in the later part of his life. He died on 21 September 2019 at the age of 82.

Jähn was born on 13 February 1937 in Morgenröthe-Rautenkranz, in the Vogtland region of Saxony, Germany. From 1943 to 1951 he attended school in his hometown. He trained as a printer until 1954 and then managed the pioneer program in a local school.

On 26 April 1955 he joined the East German Air Force, where he became a pilot. From 1961 to 1963 he was deputy commander for political work as an adamant socialist and in 1965 became responsible for air tactics and air shooting. From 1966 to 1970 he studied at the Gagarin Air Force Academy in Monino, in the Soviet Union. From 1970 to 1976, he worked in the administration of the East German air force, responsible for pilot education and flight safety.

On 25 November 1976, Jähn and his backup Eberhard Köllner were selected for the Interkosmos program. After a brief period of basic training, they devoted a year to mission-specific training. He trained in Star City near Moscow. He flew on board Soyuz 31, launched 26 August 1978 to the Soviet space station Salyut 6, where he conducted experiments in remote sensing of the earth, medicine, biology, materials science, and geophysics. After 124 orbits he returned on Soyuz 29 and landed on 3 September 1978, having spent 7 days, 20 hours, and 49 minutes in space. Because the Soviet and American space programs maintain distinctive vocabularies, he was a cosmonaut rather than an astronaut.

During and after the flight, the socialist authorities of the GDR acclaimed him as "the first German in space", emphasizing an East German victory over West Germany.

Upon his return he headed the East Germany Army's Cosmonaut Training Center near Moscow until German unification in 1990, when he left the East German military with the rank of major general. Jähn was awarded the title Hero of the Soviet Union on 3 September 1978. In 1983 he received a doctorate at the Zentralinstitut für Physik der Erde [de] in Potsdam, specialising in remote sensing of the earth. He was instrumental in forming the Association of Space Explorers. He was a founding member in 1985 and served for several years on its Executive Committee.

Starting in 1990, after Germany was reunited, he worked as a freelance consultant for the German Aerospace Center and from 1993 also for the European Space Agency (ESA) to prepare for the Euromir missions. He retired in 2002. In 2011, on the 50th anniversary of the first manned space flight by Yuri Gagarin, he explained to Der Spiegel that his taking a toy figure on his flight was not a personal choice. He took a Sandmännchen, an animated character featured on an East German children's television show, in order to film material for the show. Because he and fellow cosmonaut Vladimir Kovalyonok joked about Sandmännchen marrying another toy figure of the Russia mascot Masha, authorities found the material unsuitable for the public.

Jähn was married and had two children. He lived in Strausberg in the later part of his life and enjoyed reading and hunting. He died on 21 September 2019 at age 82. 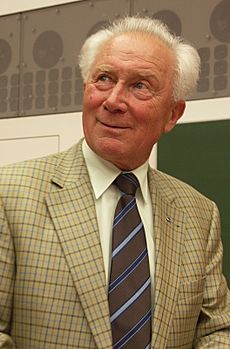 All content from Kiddle encyclopedia articles (including the article images and facts) can be freely used under Attribution-ShareAlike license, unless stated otherwise. Cite this article:
Sigmund Jähn Facts for Kids. Kiddle Encyclopedia.