The Silken Windhound is an American breed of sighthound. Like most sighthounds, Silkens are noted coursers. 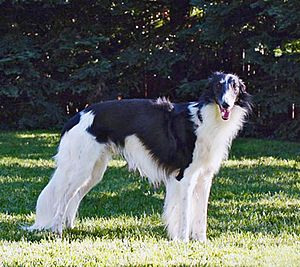 A black Silken with piebald markings.

Silken Windhounds are graceful, small to medium-sized Sighthounds with silky coats of middling length. Silkens have many coat colors that can range from white to black with brilliant brindles and solid red, in between. They can be spotted, tuxedo marked or solid colored.

Silken Windhounds are affectionate and playful and are good dogs for families with children. Owing to their friendliness, they are not good guard dogs but are easily house broken and can be trained to live with smaller household pets. Silkens particularly like agility, therapy, flyball, and obedience. (Citation needed) 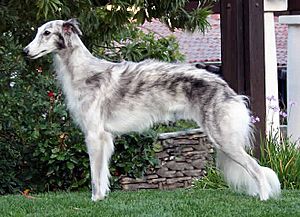 Silken Windhounds are intelligent and easily trained using reward and affection in short, positive sessions. They will work eagerly, and form strong relationships with their owners, if so treated. Like many Sighthounds, Silken Windhounds can slip out of buckle collars, so most owners favor semi-slip collars. 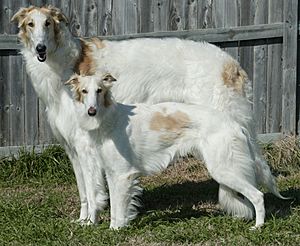 A Silken and a larger Borzoi.

Silken Windhounds typically live into their middle to late teens. Bone and joint ailments like hip dysplasia and bloat are rare. Some in the Silken Windhound breed are sensitive to ivermectin and related drugs; a simple test is now available to find whether a dog carries a defective MDR1, a multi-drug resistance gene. Responsible breeders are working to remove this gene from the breeding population. Some owners report rare cases of cryptorchidism, umbilical hernia, lotus syndrome, plus deafness, and cataracts in old age. 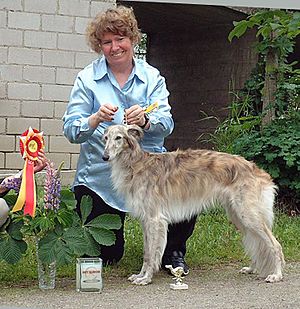 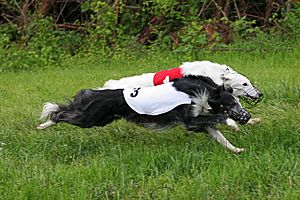 A straight race of Silkens.

All content from Kiddle encyclopedia articles (including the article images and facts) can be freely used under Attribution-ShareAlike license, unless stated otherwise. Cite this article:
Silken Windhound Facts for Kids. Kiddle Encyclopedia.