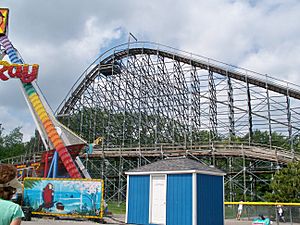 First hill on the roller coaster

The Silver Comet is a wooden roller coaster with a hybrid steel frame at Fantasy Island in Grand Island, New York.

The Silver Comet station used a similar design from the former Comet station at Crystal Beach Park. It was a wide building with a few comets on its facade. Both it and the old Comet station had a tower saying "comet" in five colors.

There was one six-car train, with each car seating four riders for a total of 24 riders Each car contained individual lapbars, seat belts for each rider, and seat dividers. The train was built by the Philadelphia Toboggan Company. The train was originally Purple, later painted to look like a comet (Red, Orange, Yellow), and eventually was painted a metallic blue. The train itself however, was sold following the parks closure in 2020. It was sold to get refurbished and will eventually be sold again at a later date.

All content from Kiddle encyclopedia articles (including the article images and facts) can be freely used under Attribution-ShareAlike license, unless stated otherwise. Cite this article:
Silver Comet (roller coaster) Facts for Kids. Kiddle Encyclopedia.