The SAC SLFCS site at Silver Creek was built as a project assigned to the 32d Communications Squadron. The site was accepted by Headquarters USAF on 29 July 1968, and was activated for continuous operations on 19 August 1968. on 5 September 1968, operational testing began at Silver Creek. 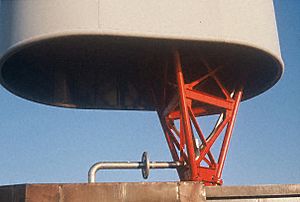 Silver Creek's radio tower was a mast radiator insulated against ground, which provided VLF communication to ground and mobile nuclear missile facilities during the Cold War. It transmitted at a maximum power of 110 kW. The facility was partially built into the ground and was designed to withstand a moderate nuclear blast from a distance of 10 miles. The facility was self-sustaining and employed a sophisticated ventilation system as well as backup diesel generators.

All content from Kiddle encyclopedia articles (including the article images and facts) can be freely used under Attribution-ShareAlike license, unless stated otherwise. Cite this article:
Silver Creek Communications Annex Facts for Kids. Kiddle Encyclopedia.