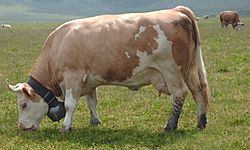 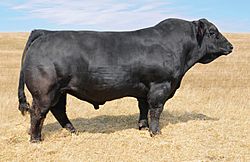 The Simmental or Swiss Fleckvieh is a Swiss breed of dual-purpose cattle. It is named after the Simmental – the valley of the Simme river – in the Bernese Oberland, in the canton of Bern in Switzerland. It is reddish in colour with white markings, and is raised for both milk and meat.

Among the older and most widely distributed of all breeds of cattle in the world, and recorded since the Middle Ages, the Simmental breed has contributed to the creation of several other famous European breeds, including the Montbeliarde (France), the Pezzata Rossa d'Oropa (Italy), and the Fleckvieh (Germany and Austria).

Namibia (1893) and South Africa (1905) were the first countries outside Europe where the breed was successfully established. Here the breed is known as Simmentaler and is mainly used for beef cattle production under suckler cow systems. Today, the breeders' society is, as far as animal numbers are concerned, the fourth largest of the 32 nondairy breeds in Southern Africa. The main reasons for its popularity are (i) it can be used with great success in crossbreeding for breeding of both cows with much milk and heavy weaners/oxen, (ii) a large number of performance-tested bulls, (iii) comprehensive advice and other breed improvement services to its breeders, and (iv) animals that do not pass stringent inspection by breed experts, are permanently eliminated from the herdbook.

In the former Soviet Union, the Simmental was the most important cattle breed. Russian Simmental (Симментальская корова) accounted for one-quarter of all cattle in the USSR. Through extensive crossbreeding, six strains were developed:

The breed is known under the following names

Pezzata Rossa: Italy. Montbéliarde: A French dairy breed. Member of European Simmental Federation but not of the World Simmental-Fleckvieh Federation. 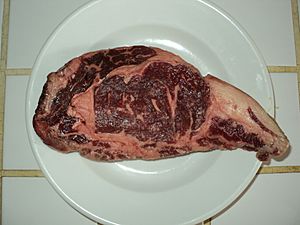 The Simmental has historically been used for dairy and beef, and as draught animals. They are particularly renowned for the rapid growth of their young, if given sufficient feed. Simmentals provide more combined weaning gain (growth) and milk yield than any other breed.

In contrast to countries which allow black and solid brown coloured Simmental in the herdbook, Namibia and South Africa only register Simmentaler with the typical colour i.e. from dark red or brown to yellow spread over the body in any pattern with at least some white on the forehead and the lower-leg area, solid black or solid red animals are non-existent because they are not registered.

No other breed in the world has such a large within-breed-type variation as Simmental-Fleckvieh which is classifiable in the following types:

The traditional colouration of the Simmental has been described variously as "red and white spotted" or "gold and white", although there is no specific standard colouration, and the dominant shade varies from a pale yellow-gold all the way to very dark red (the latter being particularly popular in the United States). The face is normally white, and this characteristic is usually passed to crossbred calves. The white face is genetically distinct from the white head of the Hereford.de:Fleckvieh es:Simmental fr:Fleckvieh

All content from Kiddle encyclopedia articles (including the article images and facts) can be freely used under Attribution-ShareAlike license, unless stated otherwise. Cite this article:
Simmental cattle Facts for Kids. Kiddle Encyclopedia.