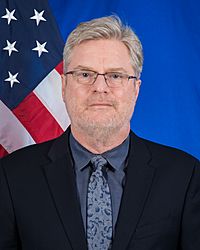 Simon Henshaw (died June 9, 2020) was an American diplomat. He was the United States Ambassador to Guinea from 2019 until his death.

From 2011 to 2013, he was Director of the Office of Andean Affairs, and, from 2008 to 2011, he was Deputy Chief of Mission at the United States Embassy in Tegucigalpa, Honduras.

All content from Kiddle encyclopedia articles (including the article images and facts) can be freely used under Attribution-ShareAlike license, unless stated otherwise. Cite this article:
Simon Henshaw Facts for Kids. Kiddle Encyclopedia.