Kids Encyclopedia Facts
This page is about the nursery rhyme. For other uses, see Simple Simon (disambiguation).

"Simple Simon" is a popular English language nursery rhyme. It has a Roud Folk Song Index number of 1977.

The rhyme is as follows;

Simple Simon met a pieman,
Going to the fair;
Says Simple Simon to the pieman,
Let me taste your ware.

Simple Simon went a-fishing,
For to catch a whale;
All the water he had got,
Was in his mother's pail.

Simple Simon went to look
If plums grew on a thistle;
He pricked his fingers very much,
Which made poor Simon whistle.

He went for water in a sieve
But soon it all fell through
And now poor Simple Simon
Bids you all adieu! 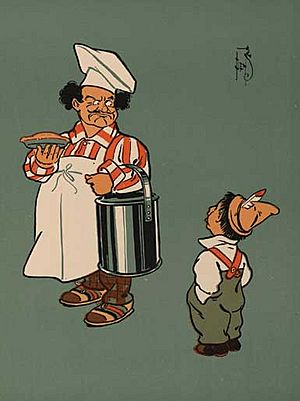 Simple Simon and the pie man, according to Denslow

The verses used today are the first of a longer chapbook history first published in 1764. The character of Simple Simon may have been in circulation much longer, possibly appearing in an Elizabethan chapbook and in a ballad, Simple Simon's Misfortunes and his Wife Margery's Cruelty, from about 1685. Another possible inspiration was Simon Edy, a beggar in the St Giles area in the 18th century.

All content from Kiddle encyclopedia articles (including the article images and facts) can be freely used under Attribution-ShareAlike license, unless stated otherwise. Cite this article:
Simple Simon (nursery rhyme) Facts for Kids. Kiddle Encyclopedia.