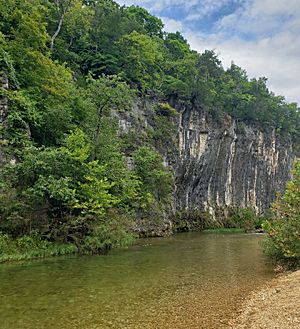 The clear waters of Sinking Creek, with the Echo Bluff in the background.

Sinking Creek is a stream in Dent, Reynolds and Shannon counties in the Ozarks of southeast Missouri. It is a tributary of the Current River.

Sinking Creek is one of the main features of Echo Bluff State Park, established in 2016. Park visitors often swim, wade, and float in the cool waters and swimming holes of the stream. The park's namesake is the Echo Bluff, which towers over the creek.

Sinking Creek was named for the fact it is a losing stream along part of its course.

All content from Kiddle encyclopedia articles (including the article images and facts) can be freely used under Attribution-ShareAlike license, unless stated otherwise. Cite this article:
Sinking Creek (Current River tributary) Facts for Kids. Kiddle Encyclopedia.