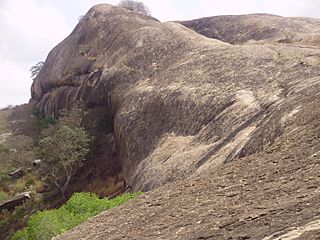 Sittanavasal Cave is a 2nd-century Jain complex of caves in Sittanavasal village in Pudukottai district of Tamil Nadu, India. Its name is a Tamil word which means "the abode of great saints".The monument is a rock-cut monastery or temple. Created by Jains, it is called the Arivar Koil, and is a rock cut cave temple of the Arihants. It contains remnants of notable frescoes from the 7th century. The murals have been painted with vegetable and mineral dyes in black, green, yellow, orange, blue, and white. Paintings have been created by applying colours over a thin wet surface of lime plaster.

While the Sittanavasal village is dated from 1st century BC to 10th century AD when Jainism flourished here, the Temple-cave was initially dated to Pallava King Mahendravarman I (580–630 AD) prior to his conversion from Jainism to Hinduism as a Shaivite.

All content from Kiddle encyclopedia articles (including the article images and facts) can be freely used under Attribution-ShareAlike license, unless stated otherwise. Cite this article:
Sittanavasal Cave Facts for Kids. Kiddle Encyclopedia.