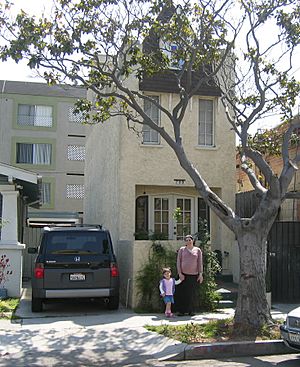 The Skinniest House in America, located at 708 Gladys Avenue in Long Beach, California

The aptly nicknamed Skinny House at 708 Gladys Avenue (corner of 7th Street) in the Rose Park neighborhood of Long Beach, California, United States, is a narrow three-story house that has been cited by both the Guinness Book of World Records and Ripley's Believe It or Not as the nation's skinniest house.

In 1959, it was discovered that the house had leaned 4 inches (100 mm) to the north and was straightened. The Skinny House is a registered city landmark of Long Beach, California, as of 1983.

Public interest lawyer William John Cox maintained his law practice in Skinny House between 1977 and 1981, including his prosecution of the Holocaust denial case.

All content from Kiddle encyclopedia articles (including the article images and facts) can be freely used under Attribution-ShareAlike license, unless stated otherwise. Cite this article:
Skinny House (Long Beach) Facts for Kids. Kiddle Encyclopedia.