Kids Encyclopedia Facts
Not to be confused with either of the hills in the Blackstairs Mountains, Slievebaun and Slievebawn.

Slieve Bawn or Sliabh Bághna (meaning "Mountain of Bághna", ancient Firbolg chieftain) is a mountain in County Roscommon, Ireland. It lies between Strokestown (to the northwest) and Ballyleague (to the southeast). It is the third-highest point in the county, after Kilronan Mountain and Seltannasaggart.

The 1837 Ordnance Survey Ireland 6" map shows no indication of any archaeological features atop the hill, but in 1950, when the Holy Year Cross was raised on the hilltop, skeletal remains were uncovered. This suggests that a passage grave once sat atop the hill.

Passage graves are usually cairns containing a passage leading to a central corbelled-roofed chamber, which is sometimes a cruciform shape. Passage graves are sometimes found in prominent locations, such as on hill-tops. Generally speaking, the less complex the passage tomb the older it is.

The cross was erected by local people for the Christian Jubilee of 1950. 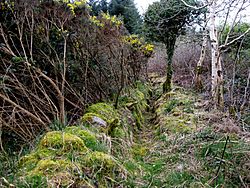 All content from Kiddle encyclopedia articles (including the article images and facts) can be freely used under Attribution-ShareAlike license, unless stated otherwise. Cite this article:
Slieve Bawn Facts for Kids. Kiddle Encyclopedia.