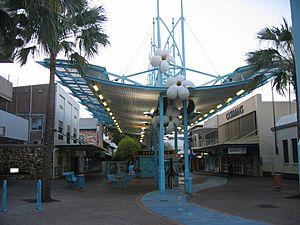 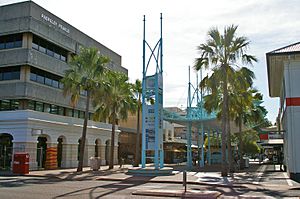 Smith Street is a major street in the Darwin Central Business district of Darwin, Northern Territory, Australia. Smith Street is named after A. H. Smith who was the first surveyor in charge of party number 3 of George Goyder in 1869. Smith Street runs 4.5 kilometres in a north-west to south-east direction on the western side of the Darwin CBD. The street intersects with Daly Street, Knuckey Street and terminates with The Esplanade.

Smith Street is a major retail shopping precinct along with the rest of the Darwin CBD. It is the second largest shopping centre in Darwin with the largest being Casuarina Square. A central feature of Smith Street Mall is a pedestrian only strip between Knuckey Street and Bennett Street. Smith Street features a variety of stores centred on the mall including new Coles Supermarket and Woolworths Supermarket and more than 200 specialty shops.

All content from Kiddle encyclopedia articles (including the article images and facts) can be freely used under Attribution-ShareAlike license, unless stated otherwise. Cite this article:
Smith Street, Darwin Facts for Kids. Kiddle Encyclopedia.