Society of St. John the Evangelist facts for kids 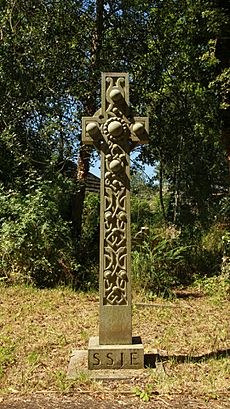 The Society of St. John the Evangelist is an Anglican order. The monks make a vow: They say they want to live in poverty and that they will not marry anyone. The order was founded by Father Richard Meux Benson, an Anglican priest in 1866. Because they were founded in Cowley, near Oxford in England they are also known as the Cowley fathers.

It has two branches, the original one in England, and one in the United States. The house in the United States was founded around the year 1874. The American branch of the society has 2 houses for their monks. Today, there are monasteries in Scotland, India, South Africa, Japan, and Canada.

The monks live under The Rule of the Society of Saint John the Evangelist. The monks spend a lot of time in prayer and they also go on missions. They are one of the first monasteries founded after the Protestant Reformation.

The Fellowship of Saint John

The fellowship of the Society of St.John the Evangelist is a group of people who want to live there lives in close a relation with the monks at the society. They give money to the society and pray for the monks there. They make a rule of life that is similar to The Rule of the Society of St.John the Evangelist. There are about 1,000 men and woman who are apart of the fellowship. One of the most famous members is Frank Griswold.

All content from Kiddle encyclopedia articles (including the article images and facts) can be freely used under Attribution-ShareAlike license, unless stated otherwise. Cite this article:
Society of St. John the Evangelist Facts for Kids. Kiddle Encyclopedia.