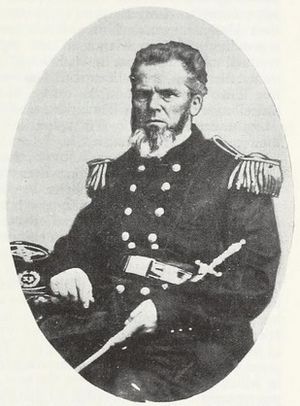 Socrates Norton Sherman (July 22, 1801 – February 1, 1873) was a U.S. Representative from New York, a physician, and an officer in the Union Army during the American Civil War.

Born in Barre, Vermont, Sherman attended the local grade schools and high school. He studied medicine and graduated from Castleton Medical College in 1824. He subsequently moved to Ogdensburg, New York, in 1825, and opened a medical practice.

Dr. Sherman was elected as a Republican to the Thirty-seventh Congress (He served from March 4, 1861 until March 3, 1863). He declined to be a candidate for renomination in the elections of 1862. During the latter half of the Civil War, Sherman mustered into the military service as a major and the surgeon of the Thirty-fourth Regiment, New York Volunteer Infantry. He mustered out on October 7, 1865, with the brevet rank of lieutenant colonel in the U.S. Volunteers.

After the war, Sherman resumed the practice of medicine in Ogdensburg, where he died on February 1, 1873. He was interred in Ogdensburg Cemetery.

All content from Kiddle encyclopedia articles (including the article images and facts) can be freely used under Attribution-ShareAlike license, unless stated otherwise. Cite this article:
Socrates N. Sherman Facts for Kids. Kiddle Encyclopedia.