Barre ( BARE-ee) is the most populous city in Washington County, Vermont, United States. As of the 2020 census, the municipal population was 8,491. Popularly referred to as "Barre City", it is almost completely surrounded by "Barre Town", which is a separate municipality.

Barre is often twinned with the nearby Vermont state capital of Montpelier in local media and businesses. It is the main city in the Barre-Montpelier micropolitan area, which has nearly 60,000 residents and is Vermont's third largest metropolitan area after those of Burlington and Rutland. Barre is also Vermont's fourth largest city. 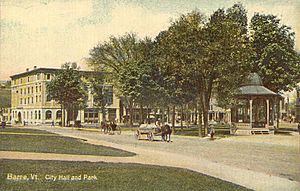 On November 6, 1780, the land was granted to William Williams and 64 others. Originally called Wildersburgh, it included what is today both the town and city of Barre. It was first settled in 1788 by John Goldsbury and Samuel Rodgers, together with their families. But dissatisfied with the name Wildersburgh, citizens renamed the town after Isaac Barré, a champion of the American Colonies. In 1895, 4.0 square miles (10.4 km2) within the town was set off and incorporated as the separate city. 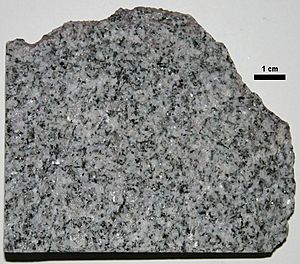 Sample of the Barre Granite from the E. L. Smith Quarry of the Rock of Ages Stone Company, Graniteville, Vermont

Barre is the self-proclaimed "Granite Center of the World". Initially established with the discovery of vast granite deposits at Millstone Hill soon after the War of 1812, the granite industry and the city itself saw a boom with the arrival of the railroad. The fame of this vast deposit of granite, which some geologists say is 4 miles (6.4 km) long, 2 miles (3.2 km) wide and 10 miles (16 km) deep, soon spread to Europe and Canada. Large numbers of people migrated to Barre from Italy, Scotland, Spain, Scandinavia, Greece, Lebanon, Canada, and a number of other countries. The population increased from 2,060 in 1880, to 6,790 in 1890, to 10,000 in 1894. By the turn of the century, Barre was noted as the state's most diverse municipality.

The Italian immigrants in particular brought a radical, largely anarchist labor movement to Barre. They were originally affiliated with the Socialist Labor Party before affiliating with the Industrial Workers of the World, and in 1916 and in 1929 the city elected a Socialist Party candidate as mayor of Barre. The old Socialist Labor Party Hall is still standing, and was listed on the National Register of Historic Places in 2000.

"Barre Gray" granite is sought after worldwide for its fine grain, even texture, and superior weather resistance. Many sculpture artists prefer it for outdoor sculpture. In 1936 the granite quarry in Barre carved out a 35-ton cross from one section of stone in the quarry.

According to the United States Census Bureau, the city has a total area of 4.0 square miles (10.4 km2), all land. Barre is drained by the Stevens Branch River and Jail Branch River, tributaries of the Winooski River.

The city is served by Interstate 89, U.S. Route 302, Vermont Route 14 and Vermont Route 62. It is bordered by the town of Berlin to the west, but is otherwise surrounded by the separate town of Barre.

There were 4,220 households, out of which 26.3% had children under the age of 18 living with them, 37.0% were couples living together and joined in either marriage or civil union, 12.3% had a female householder with no husband present, and 46.6% were non-families. Of all households, 39.2% were made up of individuals, and 16.0% had someone living alone who was 65 years of age or older. The average household size was 2.14 and the average family size was 2.86.

A Premier Basketball League (PBL) team, the Vermont Frost Heaves, played its games in Barre at the Barre Auditorium and at the Memorial Auditorium in Burlington, Vermont. The team was originally owned by Sports Illustrated writer Alexander Wolff. A local group later assumed ownership and operated the Heaves until the team ceased operations in late 2010 and subjected its players to a dispersal draft.

The Vermont Mountaineers, a collegiate summer baseball team which belongs to the New England Collegiate Baseball League, plays its home games at nearby Montpelier Recreation Field.

The quarter-mile, high-banked Thunder Road International Speedbowl is the premier motorsports venue in the state, and associated with notable NASCAR figures Ken Squier and Dave Moody. Vermont Governor Phil Scott often participates in the track's "Governor's Cup 150" among other events. Thunder Road is also frequented by the American Canadian Tour late-model series of New England, New York, and southeastern Canada. The track, which is located in Barre Town, was built in 1958 and has been in operation since 1960. 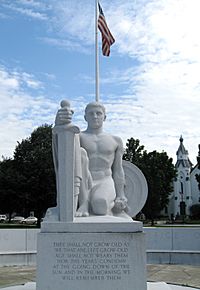 All content from Kiddle encyclopedia articles (including the article images and facts) can be freely used under Attribution-ShareAlike license, unless stated otherwise. Cite this article:
Barre (city), Vermont Facts for Kids. Kiddle Encyclopedia.