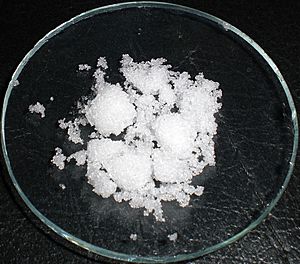 Sodium bisulfate, also known as sodium hydrogen sulfate, is a chemical compound. Its chemical formula is NaHSO4. It is made of sodium and bisulfate ions. It is a white crystalline solid. It is an acid, though not as strong as sulfuric acid. It can be made by reacting smaller amounts of sodium hydroxide and sulfuric acid. If too much sodium hydroxide is used, sodium sulfate is made instead. It is also made by reacting sodium chloride and sulfuric acid when heated. This reaction also makes hydrogen chloride. It is used to lower pH (made things more acidic).

All content from Kiddle encyclopedia articles (including the article images and facts) can be freely used under Attribution-ShareAlike license, unless stated otherwise. Cite this article:
Sodium bisulfate Facts for Kids. Kiddle Encyclopedia.