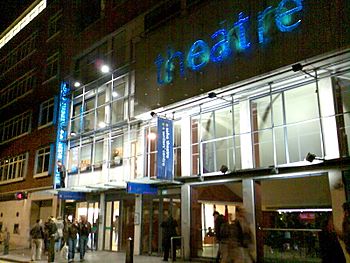 The Soho Theater in the City of Westminster.

Soho Theatre is a theatre in the Soho district of the City of Westminster in London, England. It presents new works of theatre, together with comedy and cabaret. The Soho Theatre was formed in 1969 by Verity Bargate and Fred Proud at Old Compton Street in Soho. It shifted many times before finally settling at Dean Street, also in Soho, in 2000. The present building has a 140-seat hall and an 85/100-seat studio. The theatre is also home to a Writers' Centre which helps to develop new writers to work in theatre, as well as film, television, and radio. The Centre accepts scripts from new writers.

All content from Kiddle encyclopedia articles (including the article images and facts) can be freely used under Attribution-ShareAlike license, unless stated otherwise. Cite this article:
Soho Theatre Facts for Kids. Kiddle Encyclopedia.