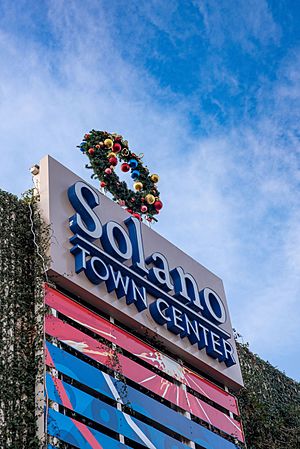 Solano Town Center, sometimes referred to as Solano Mall or Fairfield Mall, is a shopping mall in Fairfield, California, with over 125 stores, multiple restaurants and dining options. Solano Town Center is located on Travis Boulevard, one block east of I-80 off the Travis Blvd exit. It is owned by Starwood Retail Partners but leased and managed by Spinoso Real Estate Group.

Westfield America, Inc., a precursor to the Westfield Group acquired the shopping center in 1998, and renamed it "Westfield Shoppingtown Solano", dropping the "Shoppingtown" name in June 2005. In April 2012, The Westfield Group sold the establishment to Starwood Capital Group. In November 2012, the name changed again to Solano Town Center.

Mervyn's was the mall's fifth anchor store until they went out of business in 2008. Forever 21 moved into the upper level of the former Mervyn's in 2010. Sports Authority moved into the lower level of the former Mervyn's in 2011, which closed when that chain went out of business in 2016. The space has since been taken by Dick's Sporting Goods in 2017. In 2015, Sears Holdings spun off 235 of its properties, including the Sears at Solano Town Center, into Seritage Growth Properties. Sears closed its location in July 2018. In early 2020 Dave & Buster's was slated to open a brand new restaurant in a portion of the former Sears space, but construction was delayed due to the COVID-19 pandemic.

Its anchor stores are JCPenney, Macy's, Best Buy and Dick's Sporting Goods. There is also an Edwards Cinemas IMAX multiplex located above the Best Buy anchor.

All content from Kiddle encyclopedia articles (including the article images and facts) can be freely used under Attribution-ShareAlike license, unless stated otherwise. Cite this article:
Solano Town Center Facts for Kids. Kiddle Encyclopedia.