Solanum nelsonii (often misspelled Solanum nelsoni), common names pōpolo and Nelson's horsenettle, is a partially woody sprawling shrub-like perennial plant in the family Solanaceae, part of the Solanum or nightshade genus. This poisonous plant is endemic to the Pacific Islands. It grows low in coastal sites in coral rubble to pure sand.

Solanum nelsonii was listed as an endangered species wherever found by the U.S. Fish and Wildlife Service on September 30, 2016. Pōpolo is used in restoration projects around the state of Hawaii and the Northwest Hawaiian Islands. 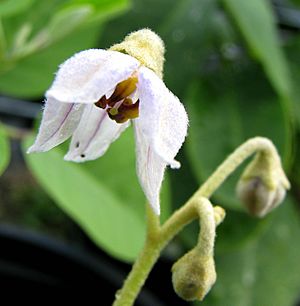 Nelson's horsenettle was first described by Michel Félix Dunal. The scientific name Solanum nelsonii has also – invalidly – been given to two other species of nightshade:

Several varieties of Nelson's horsenettle have been described, but they are not usually considered valid anymore:

Not to be confused with S. acuminatum as described by Ruiz & Pavón Jiménez.

Not to be confused with S. intermedium as described by Otto Sendtner in C.F.P. von Martius.

Not to be confused with S. thomasiifolium.

All content from Kiddle encyclopedia articles (including the article images and facts) can be freely used under Attribution-ShareAlike license, unless stated otherwise. Cite this article:
Solanum nelsonii Facts for Kids. Kiddle Encyclopedia.