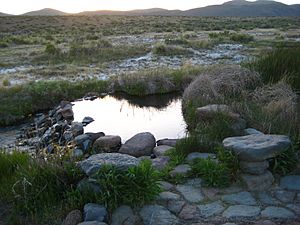 Soldier Meadows hot spring system is a group of hot and warm springs near the town of Gerlach, Nevada.

The springs were first used by Indigenous people who occupied the Great Basin area for more than 10,000 years. The band of Northern Paiute people in this area are called Aga'ipanadokado or "fish lake eaters." The Soldier Meadows area gets its name from the time during the American Civil War when troops were stationed nearby.

Soldier Meadows Warm Pond is a large warm spring located in the middle of the meadow with a large natural, two-foot deep soaking pool. The warm mineral water percolates up through the sand and gravel bottom. The temperature ranges from 90–102 °F. A half mile away is a second small warm pond with a temperature of 100 °F. Elevation 4,500 feet. GPS coordinates are N 41 22.793 W 119.10.884.

Several hot springs discharge into a small trench leading to a 20-foot diameter three-foot deep soaking pool with a sandy bottom. The water temperature is 104 °F.

Because of the high use of the various hot spring features in the area, it has been designated an Area of Critical Environmental Concern (ACEC) by the Bureau of Land Management. Use of sunscreen and other chemicals have compromised the water quality and impacted on the life forms it supports, including the Soldier Meadows Springtail snail, a species that only exist in this habitat. The building of rock soaking pool enclosures also impacts upon the springtail snail population.

All content from Kiddle encyclopedia articles (including the article images and facts) can be freely used under Attribution-ShareAlike license, unless stated otherwise. Cite this article:
Soldier Meadows hot spring system Facts for Kids. Kiddle Encyclopedia.