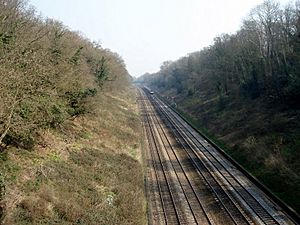 Map of Sonning Cutting. (The grid lines are at intervals of 1,000 metres.)

Sonning Cutting is on the original Great Western Railway built by Isambard Kingdom Brunel. It is to the east of Reading station and to the west of Twyford station near the village of Sonning in Berkshire, England. The railway's originally planned route had been around the north of Sonning Hill past the village. But because of local objections the railway bypassed the village in a cutting, over a mile long and up to sixty feet deep, through the hill, giving a more direct route between Twyford and Reading.

The cutting was hand-dug with no machinery and the spoil removed in wheelbarrows and horse-drawn carts. It took two years to complete and several people were killed in the process. The line was opened on 30 March 1840.

After the ending of the broad gauge in 1892 the railway was widened to four tracks. This involved a major rebuilding of the cutting, during which the slope of the sides was reduced.

All content from Kiddle encyclopedia articles (including the article images and facts) can be freely used under Attribution-ShareAlike license, unless stated otherwise. Cite this article:
Sonning Cutting Facts for Kids. Kiddle Encyclopedia.