The Sonoma Valley Museum of Art (known colloquially as the SVMA) is an art museum located in Sonoma, California, United States. Founded in 1998, the museum exhibits works by regional, national and international modern and contemporary artists.

The Museum was founded in 1998 and is Sonoma's only modern and contemporary museum. In early 2011, the museum opened a Museum Cafe, with the hopes of providing a conversation and reflection space for visitors to the museum. Coffee and local baked goods are sold to guests, with a portion supporting the museum. Fundraising for the cafe through the "Fun de Latte" campaign; with a $150 contribution to the museum, donors would receive free coffee and tea for a year. Shortly thereafter the Museum opened the Stanley Abercrombie and Paul Vieyra Art Library. The library is based on a promised gift of 20,000 books from board members Stanley Abercrombie and Paul Vieyra. Housed in the Pamela and John Story Gallery, the museum's current collection of 2,500 art, architecture and design books serve as a public reference source. In 2016 the Museum Store opened, replacing the Museum Cafe, specializes in uniquely designed products made by local artists as well as international gifts of all kinds. The one of a kind museum setting offers educational, inspirational and fun products. In 2018 SVMA rolled out with a new logo by Mende Design in San Francisco.

SVMA's gallery space consists of 3,000 square feet, along with smaller other gallery spaces. In 2010 the SVMA installed a 25.9 kW solar electric system which serves to supply over 90% of the museum's power needs. 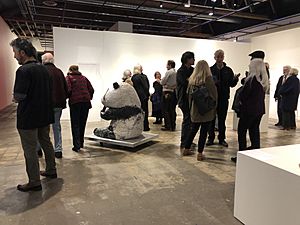 Exhibition opening of Richard Shaw and Wanxin Zhang show in 2019

The museum exhibits fine art by local, national and regional artists and does not maintain its own collection. SVMA utilizes works from private collections, artists, public institutions and related sources for their exhibitions. Every year the Museum showcases the work of regional 4th and 5th graders in Art Rewards the Student. In 2009, approximately 16,500 visitors attended exhibitions and educational programming at the museum. SVMA generally hosts one to two exhibitions at the same time.

Early 2011 brought the exhibition "Eco Chic" to SVMA, a show that showcases "Gron Mode" (Swedish for "Green Fashion") fashion by Swedish fashion designers. With a goal to educate and challenge visitors views of fashion, sustainability, and the green lifestyle, the exhibit showcases the clothing designs and their production methods. Artists featured in the exhibit include Julian Red and Anja Hynynen. "Eco Chic" was produced by the Swedish Institute and the Consulate General of Sweden San Francisco. The exhibition was described by art critic Juliane Porter as showing "smart and beautiful" clothing.

From November 2010 until February 2011 SVMA hosted a solo exhibition conceived by and about San Francisco kinetic artist Fletcher Benton. The exhibition, curated by Kate Eilersten, explored Benton's inspirations, creation process and the tools he utilizes to create his sculptures. Large scale works and maquettes were exhibited alongside large-scale photographs, sound elements, and a representation of Benton's work environment.

The Sonoma Valley Museum of Art is a 501(c)(3) corporation governed by director Linda Keaton and as of 2019 the Museum was staffed by 8 employees and an estimated 150 volunteers. The board consists of 20 voting members and is led by co-Presidents Diana Bugg and Cherie Hughes. Members contribute to the institutions and receive complimentary admission, the Museum newsletter, regional discounts at other institutions and other benefits based on their contribution level. Members are also given voting status at the annual meeting to elect the Board of Directors.

The Sonoma Valley Museum of Art is a magnet of creative energy and cultural inspiration. Its exhibitions and educational programs engage the community in the art and ideas of our time, encouraging curiosity and innovation.

The Museum offers student educational programming, lectures, workshops, tours, and internship opportunities. Art Rewards the Students (ARTS) places art instructors in 4th and 5th grade classrooms throughout Sonoma Valley. The program is sponsored by the local arts and community organizations. In the early 2010s Sonoma resident Calvin R. Vander Woude donated $100,000 towards expanding public and educational programming. This donation, along with funding from individual donations and the Museum's annual Fund-A-Need campaign, has contributed to the renovation of previous storage spaces into classrooms.

SVMA hosts a few major events each year, as well as smaller events throughout.

The Museum's annual gala dinner and auction is Fresh Paint, which raises funds for the SVMA's annual budget and special projects. In 2010 the Museum raised over $45,000, and the theme was Moulin Rouge and featured French-inspired art and entertainment.

Dia de los Muertos is celebrated, with the Museum working with Sonoma Valley's large Latino population to host artistic and educational events. Altars are showcased within the museum, music, dance, and a community altar is featured on the outside of the museum entrance.

All content from Kiddle encyclopedia articles (including the article images and facts) can be freely used under Attribution-ShareAlike license, unless stated otherwise. Cite this article:
Sonoma Valley Museum of Art Facts for Kids. Kiddle Encyclopedia.