The building was constructed between 1905 and 1910. The designs for the building were executed by the Minneapolis architectural firm of Bell & Detweiler, who gave the building similar features to the Montana State Capitol in Helena, Montana. The planning and construction cost was almost $1,000,000.

In 1921 a large addition was built onto the building's rear elevation, to a design by architect Bell's later firm, Bell & Kinports. 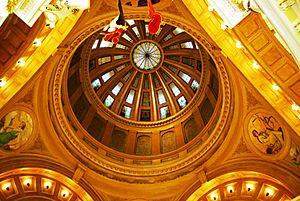 The floor in the capitol building is made of terrazzo tile. Common lore says the floor was laid by 66 Italian artists. To give these artists a chance to place a mark in the building (without allowing them to actually sign their names to the floor), each is said to have been given a blue stone to place in the floor. Only 55 of these tiles have been found, however. It is thought that the remaining stones may have been placed in locations now covered by walls, doors, or carpeting. 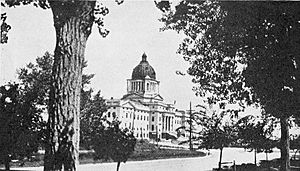 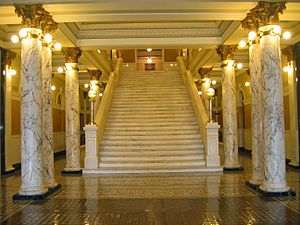 From the first floor, a marble staircase leads upstairs. In front of the staircase, display cases house the First Lady Gown Collection. Miniature replicas have been made of the gown worn by each first lady to the state inaugural ball. These replicas are worn by dolls in the display case. Along with the doll, a picture of each governor's family and other mementos are also displayed.

On the second floor, the marble staircase leads into a rotunda. The dome of the rotunda is 96 feet high. The bottom ring is designed to resemble a string of ribbons joined together, which is meant to symbolize the eternal nature of government. The interior of the dome is decorated with sixteen images of the Tree of Life. The dome also displays acanthus leaves to represent wisdom and a pasque flower, which is the state flower.

The third floor houses the state's House of Representatives and the state's Senate. The galleries for both, from which the public can observe the legislative process, are located on the fourth floor. 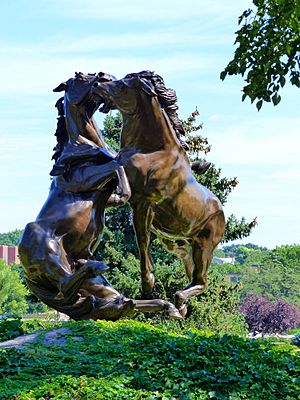 Four memorials are on the grounds of the capitol building. The Fighting Stallions Memorial is a sculpture built to honor the eight South Dakota residents, including Governor George S. Mickelson, who died in an airplane crash on April 19, 1993. The Flaming Fountain Memorial is a fountain with a perpetually burning natural gas flame. It was installed to honor South Dakotan veterans. The Law Enforcement Officer Memorial pays tribute to police officers who have died in the line of duty. Six bronze figures on a peninsula in the Capitol Lake comprise the World War II Memorial; each represents one of the branches of service in which South Dakota residents served during World War II.

In anticipation of South Dakota's state centennial during 1989, the building was renovated extensively and restored during the administrations of Governors Richard F. Kneip, Harvey L. Wollman, Bill Janklow, and George S. Mickelson. The renovation required 22 years and restored much of the building and its decoration, including the tile floor, to its original appearance. The tiled floor was also repaired; each of the tile workers who did the repairs is said to have been given a heart-shaped stone with which to mark the new floor, as the original workers had. Work began in 2013 to restore stained glass throughout the building with the $2.7 million project concluded in time for South Dakota's 125th Anniversary celebrations October 1.

All content from Kiddle encyclopedia articles (including the article images and facts) can be freely used under Attribution-ShareAlike license, unless stated otherwise. Cite this article:
South Dakota State Capitol Facts for Kids. Kiddle Encyclopedia.