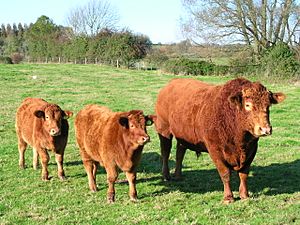 A bull and two calves

The South Devon is a British breed of beef cattle. It is the largest of the British native breeds, and is believed to have descended from the large red cattle of Normandy which were imported during the Norman invasion of England. It is a rich, medium red with copper tints, though it varies in shade and may appear slightly mottled. It is used for beef production although it has been milked in the past. A breed association, The South Devon Herd Book Society, was founded in 1891.

The South Devon is thought to have evolved from the large red cattle of Normandy which were imported to England at the time of the Norman invasion. It originated in South West England, in an area of Devon known as the South Hams, and spread through Devon and Cornwall. Historical evidence indicates that isolation caused the divergence of the North and South Devon into physically distinct types, though occasional crossing between the two breeds occurred until the mid-nineteenth century.

The South Devon had been established as a breed by the year 1800. With a light red coat, they were powerfully built and supplied rich milk and good beef, finely grained and marbled, and were relied upon to pull ploughshares until well into the nineteenth century. Careful selection of breeding stock improved the breed considerably. The South Devon Herd Book Society was founded in 1891 when it was recognised by the government as an official body, and the South Devons become one of the fourteen breeds of cattle whose herd books date back to the second half of the nineteenth century.

During the early years of the twentieth century the breed was considered as dual purpose, for the production of milk and beef. Although most herds were milked during and soon after the Second World War the trend has been increasingly towards beefier sires since the 1960s. Although it is now a purely beef breed, the dual-purpose heritage has significance for the suckling of calves. 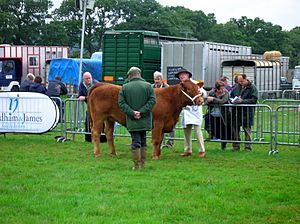 An example of judging 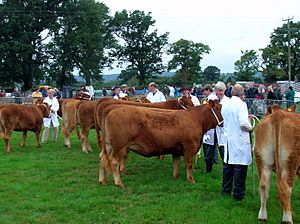 The breed is exceptionally adaptable to varying climatic conditions and is presently well established on five continents. Wherever they have been introduced South Devon cattle have been well accepted and exhibited strong performance for production and profitability.

South Devons were one of the few British breeds to have been selected for draught purposes as well as for beef and milk. The first importations into Australia were of milking cows carried on sailing ships. Several large importations occurred in the late 19th and early 20th centuries but the breed then lost its identity through crossbreeding. Importations from Britain took place in 1969, and the first purebred animals were imported from New Zealand in 1971. The breed occurs in most states of Australia.

The first South Devons were taken to the United States in 1969, and in 1974 the North American South Devon Association was formed for the purpose of development, registration and promotion of the South Devon breed in that country.

Females are early maturing and may calve at two years of age (although 2.5–3 years is still common). A dam can calve every year for as long as 15 years, with the average gestation of 286 days. Most births are single calves but twins do occur in approximately 10% of calvings.

All content from Kiddle encyclopedia articles (including the article images and facts) can be freely used under Attribution-ShareAlike license, unless stated otherwise. Cite this article:
South Devon cattle Facts for Kids. Kiddle Encyclopedia.