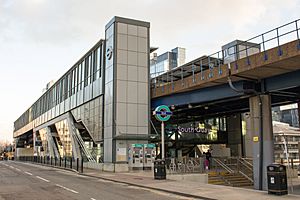 South Quay is a Docklands Light Railway (DLR) station on the Isle of Dogs, London, England. The station is between Crossharbour and Heron Quays stations and is in Travelcard Zone 2. South Quay station is located on the southern shore of the South Dock of the West India Docks. The current station platforms sit astride the channel connecting Millwall Dock to the West India Docks.

The original South Quay station opened in 1987 in Millwall, and was a standard DLR phase 1 elevated station. It was later extended to permit the use of 2 car trains. The station was constrained by sharp curves at both ends and could not be further extended on its original site. The DLR planned to operate 3 car trains on this line so the station was relocated to a new site over Millwall Dock. The new site is some distance to the east, so the relocated station is partly in Cubitt Town.

All content from Kiddle encyclopedia articles (including the article images and facts) can be freely used under Attribution-ShareAlike license, unless stated otherwise. Cite this article:
South Quay DLR station Facts for Kids. Kiddle Encyclopedia.