Cubitt Town is a district on the eastern side of the Isle of Dogs in London, England. This part of the former Metropolitan Borough of Poplar was redeveloped as part of the Port of London in the 1840s and 1850s by William Cubitt, Lord Mayor of London (1860–1862), after whom it is named. It is on the east of the Isle, facing Royal Borough of Greenwich across the River Thames. To the west is Millwall, to the east and south is Greenwich, to the northwest Canary Wharf and to the north, across the Blue Bridge, is Blackwall. It is in Blackwall & Cubitt Town Ward of Tower Hamlets London Borough Council. 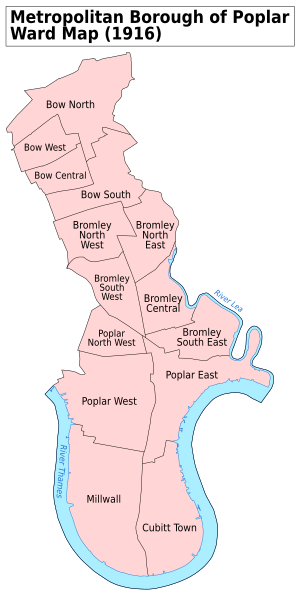 A map showing the Cubitt Town ward of Poplar Metropolitan Borough as it appeared in 1916.

It is named after William Cubitt, Lord Mayor of London (1860–1862), who was responsible for the development of the housing and amenities of the area in the 1840s and 1850s, mainly to house the growing population of workers in the local docks, shipbuilding yards and factories. As it grew, Cubitt also created many local businesses employing manual labourers as well as the streets of housing to accommodate them.

For many years this area was home to a number of shipbuilders, such as Westwood, Baillie, Samuda Brothers, J & W Dudgeon and Yarrow Shipbuilders. Noteworthy ships launched here included 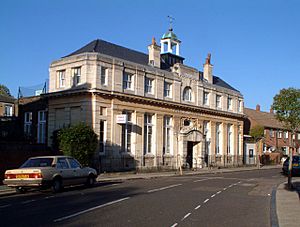 A public library was financed by Andrew Carnegie and built by C. Harrold Norton, being completed in 1905. Will Crooks, the then Mayor of Poplar, had attended a meeting at the Guildhall, where Carnegie had promised to fund public libraries. Crooks was able to get a commitment from him to pay for two libraries, this one in Cubitt Town and another in Bromley by Bow. Carnegie agreed to provide £15,000 for both together. The total expense for this building was £6,805 13s 10d, which included some neighbouring land which originally served as a public garden before providing space for an extension to be used a meeting hall and erected in 1962.

The building is currently owned by the Tower Hamlets London Borough Council as part of their library service.

For details of education in Cubitt Town, see List of schools in the London Borough of Tower Hamlets.

Cubitt town is home to a number of recreational facilities:

The nearest station to Cubitt Town is Crossharbour on the Docklands Light Railway, which opened on 31 August 1987.

Cubitt Town is connected to London's road network by the north-south Manchester Road A1206.

All content from Kiddle encyclopedia articles (including the article images and facts) can be freely used under Attribution-ShareAlike license, unless stated otherwise. Cite this article:
Cubitt Town Facts for Kids. Kiddle Encyclopedia.