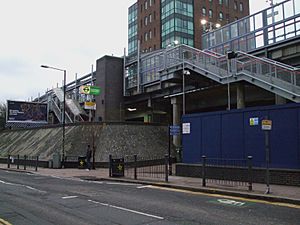 Crossharbour is a light metro station on the Docklands Light Railway (DLR) Bank-Lewisham Line in Cubitt Town, East London. The station is on the Isle of Dogs between Mudchute and South Quay stations. It is in Travelcard Zone 2. The name "Crossharbour" refers to the nearby Glengall Bridge across Millwall Inner Dock.

The Docklands Light Railway station opened as "Crossharbour" on 31 August 1987. It was renamed in 1994 to "Crossharbour and London Arena". After the neighbouring London Arena was demolished in 2006, the original name was restored.

All content from Kiddle encyclopedia articles (including the article images and facts) can be freely used under Attribution-ShareAlike license, unless stated otherwise. Cite this article:
Crossharbour DLR station Facts for Kids. Kiddle Encyclopedia.