The museum was founded in 1970 by the Atlanta Chapter of the National Railway Historical Society. There are over 90 pieces of rolling stock exhibited on the 30-acre (12 ha) site. In 2000, the museum was given the title of being Georgia's official transportation history museum, and the collection of exhibits continues to diversify to reflect this.

In addition to the rolling stock there is a wide variety of railroad artifacts and an extensive archive. The grounds also contain the restored 1871 Duluth passenger train depot, a G16/Park train ride, and a model railroad housed in Building 1. Visitors can also take a brief train ride on restored cabooses over track which runs the length of the property. 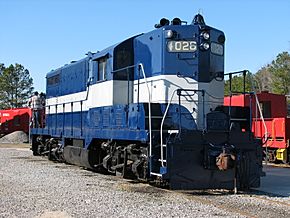 The collection also includes a Trackmobile.[2]

The museum hosts a series of annual special events, including Caboose Days in April, the Fast Track 5K in May, Locomotive Celebration in June, Trains, Trucks & Tractors in August and Classics at the Crossing in October.

All content from Kiddle encyclopedia articles (including the article images and facts) can be freely used under Attribution-ShareAlike license, unless stated otherwise. Cite this article:
Southeastern Railway Museum Facts for Kids. Kiddle Encyclopedia.