The Southern Museum of Flight is a civilian aviation museum Birmingham, Alabama USA. The facility features nearly 100 aircraft, as well as engines, models, artifacts, photographs, and paintings. In addition, the Southern Museum of Flight is home to the Alabama Aviation Hall of Fame, which presents Alabama Aviation History through collective biography.

Notable aircraft on display include a Wright Flyer, Curtis Pusher, Fokker D-VII, Alexander Eaglerock, F-4 Phantom, F-86 Sabre, AH-1 Cobra, Soviet-built MiGs, Mi-24 Hind, A-12 Blackbird spy plane, the "Lake Murray" B-25, and an array of experimental aircraft. The Lake Murray B-25C Mitchell bomber crashed in South Carolina during a 1943 training exercise. The right engine was torn off during the crash but the crew was able to escape unharmed before she sank to a depth of 150 feet (46m). The aircraft became a dive site for local technical divers until she was raised from the depths of the lake in September 2005. Dr. Bob Seigler who spearheaded the project, John Hodge and Dr. Bill Vartorella, formed the Lake Murray B-25 Rescue Project to salvage the aircraft from the bottom of Lake Murray. After recovery the remains of the aircraft were moved to the Southern Museum of Flight in Birmingham, Alabama for conservation and museum display. A video crew, including maritime video experts from Nautilus Productions, documented the recovery for the Mega Movers series on the History Channel.

The museum plans to reopen at the Grand River Technology Park in 2021 or 2022. 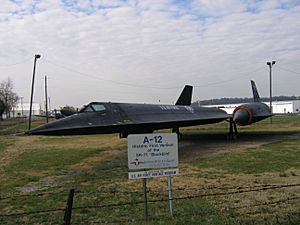 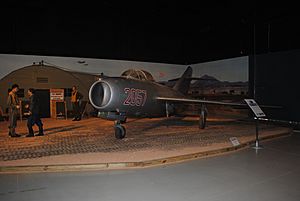 All content from Kiddle encyclopedia articles (including the article images and facts) can be freely used under Attribution-ShareAlike license, unless stated otherwise. Cite this article:
Southern Museum of Flight Facts for Kids. Kiddle Encyclopedia.