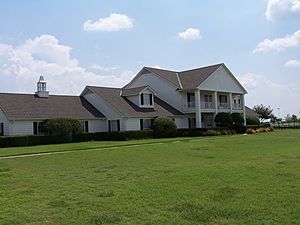 Southfork Ranch as seen in the television series Dallas

Southfork Ranch is a conference and event center in Parker, Texas, in the United States, about 25 mi (40 km) north of Dallas. The ranch includes the Ewing Mansion, which was the setting for both Dallas television series: the original, which first aired on CBS from 1978 to 1991 (except for the first five episodes which were at Cloyce Box Ranch), and its continuation, first aired on TNT from 2012 to 2014.

The ranch appears in the television series Dallas. Exterior shots were filmed on location from 1979 until 1989, though Lorimar Productions also made a studio mock-up of the ranch's exterior (complete with swimming pool) in California in 1979 for use when the weather made it impractical to film on location in Texas. From 1989 the series' production shifted entirely to the California studio set. The reunion movies J.R. Returns (1996) and War of the Ewings (1998) returned to the ranch, as did the non-fiction special The Return to Southfork (2004). War of the Ewings, in 1998, was the only time filming was done inside the real ranch for dramatic purposes. Southfork was again used for the new Dallas series.

In 1993–94 the ranch was featured in the Little Texas music video "God Blessed Texas".

The ranch is now an event and conference center, owned by Forever Resorts. It was home to the KLTY-FM radio Christian concert Celebrate Freedom, held annually during the Independence Day celebration, and hosted the 4 July 2009 "America's Tea Party", which an organizer said drew an estimated crowd of 25,000–35,000.

In December 2012 a memorial service was held at the Southfork Ranch after the death of actor Larry Hagman, who starred as J.R. Ewing in the series. A memorial book for fans to sign was set up in the "J.R. Ewing room".

All content from Kiddle encyclopedia articles (including the article images and facts) can be freely used under Attribution-ShareAlike license, unless stated otherwise. Cite this article:
Southfork Ranch Facts for Kids. Kiddle Encyclopedia.