Souvanna Phouma was the son of Bounkhong, the last vice-king of Luang Prabang and a nephew of King Sisavang Vong of Laos, given a French education in Hanoi, Paris and Grenoble, where he obtained his degree in architecture and engineering. He returned to his homeland in 1931, married Aline Claire Allard, the daughter of a French father and a Lao mother, and entered the Public Works Service of French Indochina.

Souvanna Phouma, together with his brother, Prince Phetsarath Rattanavongsa (1891–1959) and his half-brother, Prince Souphanouvong (1909–1995), around the end of World War II, joined the Lao Issara (Free Laos) movement established to counter the French occupation and its provisional Vientiane government (1945–46).

When the French reoccupied Laos, Souvanna fled to exile in Bangkok, but returned to Laos in 1949 as France began conceding autonomy to Laos.

In 1951, Souvanna became Prime Minister of Laos under the National Progressive Party banner with a landslide victory, winning 15 of the 39 seats in the National Assembly. He was prime minister until 1954.

After elections in December 1955, Souvanna Phouma returned to the prime ministership on a platform of national reconciliation. In August 1956 Souvanna and the Communist Pathet Lao, which his half-brother Souphanouvong headed agreed on broad proposals for a 'government of national union'. Elections for 21 extra assembly seats were finally held in May 1958, with parties aligned with the Pathet Lao acquiring 13. Souphanouvong entered the government as Economic Minister. Another Pathet Lao leader, Phoumi Vongvichit, also acquired a Ministry. 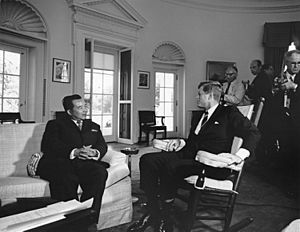 Prince Souvanna Phouma and US president John F. Kennedy in 1962

In June 1958 Souvanna was again forced to resign by the rightists. The king accepted the vote as legal the next day when he signed Royal Ordinance No. 282, dismissing Souvanna Phouma's government and giving powers provisionally to the Revolutionary Committee. Royal Ordinance No. 283, approved a provisional government formed by Prince Boun Oum, who acted as front man for Phoui Sananikone. He was one of the Three Princes, whom Sisavang Vatthana appointed to form a coalition government between the rightists and Pathet Lao but it collapsed, and the Laotian Civil War began.

Souvanna Phouma was elected President of National Assembly from May 1960 to August 1960 following the 1960 elections.

All content from Kiddle encyclopedia articles (including the article images and facts) can be freely used under Attribution-ShareAlike license, unless stated otherwise. Cite this article:
Souvanna Phouma Facts for Kids. Kiddle Encyclopedia.