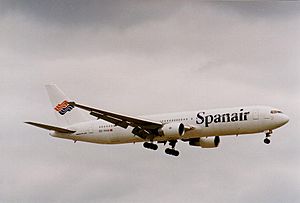 Spanair was an airline based in Catalonia which is in Spain. It's main base of operations or hub is at Barcelona Airport but it also flew many flights from Madrid Airport and Palma de Mallorca Airport. The airline was a member of the major airline alliance Star Alliance. Spanair stopped its flight operations the 27th of January, 2012, when its closure was announced.

Spanair flew mainly to destinations in Europe with only a very limited number of flights to the north of Africa. They also had charter flights for holiday companies.

This is a summary of the Spanair fleet:

The entire fleet was sold to different airlines in 2012.

All content from Kiddle encyclopedia articles (including the article images and facts) can be freely used under Attribution-ShareAlike license, unless stated otherwise. Cite this article:
Spanair Facts for Kids. Kiddle Encyclopedia.